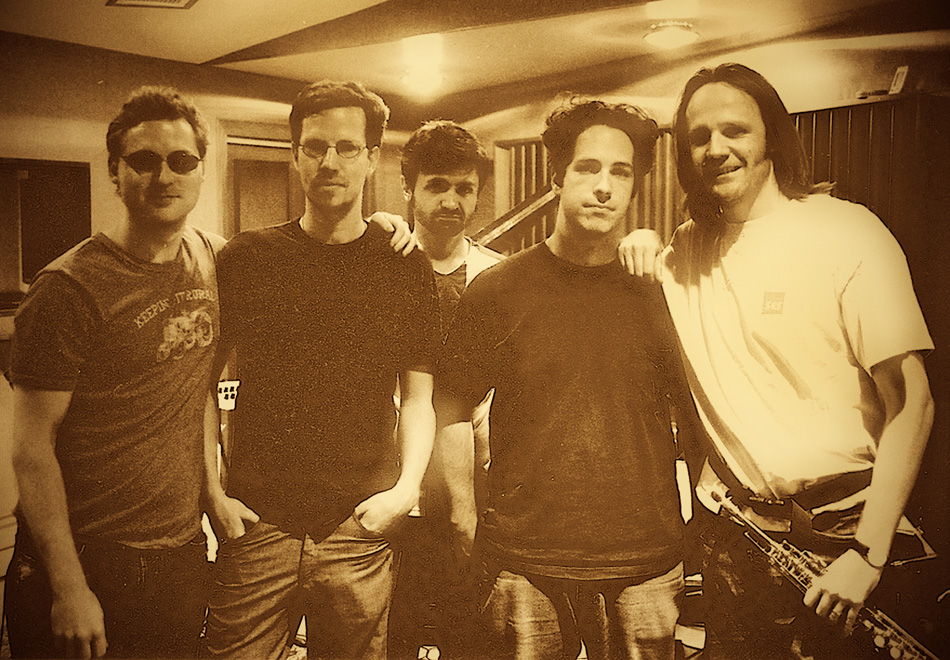 TALAT plays Original multicultural jewish music based on new directions on interpretation of Klezmer, middle eastern grooves and African themes and spirituals, roaming between the borders of Jazz, Groove ,Dance and new structures of improvisation, using a unique blend of scales and modes often used in the Ashkenaz traditions in East Europe, cross overed with the North African modes emphasizing the role of Israel as the melting pot homeland of all these traditions fused in the creational compositions, playing original music through improvised interludes, innovative solos and spontaneous team play, implying folk and groove elements, with an organic pastels of groovy bass lines, challenging horn melodies and diverse compositions with multi cultural rhythms and riffs. TALAT has played at some of the best Festivals and clubs in New York, Europe and the Middle East including the Sao Paolo Klezmer festival in Brazil, London Klezmer Festival in the U.K, The Blue Note Jazz Club and the Public theatre in New York City, The Jewish Music Festival in Washington D.C, The Toronto Jewish Center in Canada, Celebrate Israel Festival  in Palm Beach,Florida, The Jerusalem Festival In Israel, the 92nd street Y,  City Winery NY and many more.

“TALAT is a Dynamic new ensemble based in New York that plays original music crossing the borders of Jazz, Middle Eastern Groove and Klezmer. Featuring a quintet of some of the most talented players out of the new generation, this is a brilliant debut CD that will delight fans of Masada, Rashanim, Satlah and the Hasidic New Wave. Loping melodies, catchy hooks and improvisational fireworks from a new generation bringing Jewish music to exciting new places…”JOHN ZORN

“TALAT brings something unxepected to every track, playing blues, funk and even mellower tunes has compelling chemistry in abundance. This kind of fluidity cannot be accomplished unless solid relationships are both ecnouraged and formed between musicians.”Ernest Batildes, ALL ABOUT JAZZ

“TALAT seamlessly merges Jewish Klezmer stylizations with Middle Eastern modalities into a largely, persuasive modern jazz vibe. With sonorous flows, prophetic themes and propulsive shifts in momentum, the musicians indulge in tension/release episodes, topped off with melodic storylines, where the artists fuse explorative frameworks with a dancehall type sensibility. Overall, this is a radiantly produced session, firmed-up by the group’s conveyance of good cheer and excellence in execution.”EJAZZ

“TALAT, an exciting quintet joins the ranks of groups like new Klezmer Trio and Masada with their release of The Growl, Has the ability to add a strong underlying harmonic foundation or simply mix the obvious amounts of klezmer and jazz, free or otherwise, with classical music influence and up to date harmonic sense that leans toward jazz from the past decade. This album has something for everybody and Talat is a group worthy of a lot more attention.”  JAZZ IMPROV

TALAT shapes klezmer with a fusion of other ancient and modern sounds blends drone, middle-eastern strings, and even a quiet echo of prog rock in a meditation showing how music can often get closer to the dynamics of religious feeling than any other art form and expresses a longing for an encounter with the holy wherever it may be found. Its mix of compositional and improvisational qualities make this sensibility so palpable – just as faith is often about both tradition and breaking with tradition, the foundation of the old and the radical promise of the new. ZEEK JEWISH MAGAZINE

TALAT is a NY based quintet with exceptional abilities and technique- hearing this album really knocked me out completely. Never before have I heard such a harmonious and clever interchange of Klezmer and jazz, almost painfully brilliant. The music cleverly moves between the Klezmer-like melodies and the jazz-like improvisations with such ease and elegance that the transition seems to be perfectly natural and smooth. The arrangements are devilishly clever and intricate, but easy on the ear, so this wonderful music should please even the less experienced listeners who had little experience with contemporary improvised music. This is a rare gem and an essential example of music transcending the limitations of what is considered   humanly possible. A must!  Adam Baruch, JAZZIS

TALAT plays a lively, horn-heavy brand of jazz. Their roots are firmly and fundamentally planted in bebop, but their deep Jewish influences push them into unique territory :classy jazz with an adventurous spirit and not a shred of pretension, has a real creation on their hands, and they deserve to be heard :alluring, cerebral, technically impressive. JAMBASE

Composed of five accomplished musicians, TALAT plays original interpretations of klezmer, Middle Eastern grooves and African themes and spirituals, roaming between the borders of jazz, groove and improvisation. With piano, trumpet, saxophone, bass and percussion, TALAT offers improvised interludes, riveting solos and spontaneous team play. Combined with familiar riffs and lively rhythms, they create music that is as challenging as it is appealing. Bandleader and pianist Alon Nechushtan is a graduate of the New England Conservatory and the Jerusalem Academy of Music and Dance, and the recipient of numerous awards and grants. The band’s debut recording on the prestigious Tzadik label earned accolades from music critics around the world. TALAT has toured in the US, Europe and the Middle East, and this is their DC debut. WASINGTON POST

TALAT klezmer ensemble, group led by keyboardist, Alon Nechushtan likes to push the boundaries of modern jewish music into the world of jazz and funk with its intricate, avant gard improvisations. This group which released the cd The growl out on John Zorn’s Tzadik label this past fall, features Marc Mommaas on Sax, Matt Pavolka on Bass, Jordan Perlson on drums and Matt Shulman on Trumpet. NEW YORK MAGAZINE

TALAT’s inaugural recording, The Growl, while paying its considerable dues to klezmer, covers more bases, including African and Middle Eastern music, plus spiritual themes, all processed through improvised contexts that plays on all the familiar shticks of klezmer, but stresses the quintet’s tight interplay and fluidity.        Eyal Hareuveni, ALL ABOUT JAZZ

TALAT are a group based out of New York City. Their meshing of Klezmer music with other musical discliplines is what makes up their sound. Using Klezmer as the backbone of the sound allows Talat to use Israel as not only a physical but musical melting pot homeland an thus other styles come into play: North African modes and Middle Eastern rhythms conduct themselves as if in a lively conversation in a busy market. Just about all the composition on the recording clock in at over 5 minutes allowing the band to stretch out with many fine improvisational passages. The Jazz aspects (as well as the textured, spacey grooves that serve as interludes) seem reflect the musicians New York City experiences as part of their melting pot sound.If you like challenging yet engaging improvisational instrumental music then Talat is for your ears !WORLD RHYTHM MAGAZINE

TALAT produces an unclassifiable sound with the release of their recent album, The Growl. With brasses blowing and cascading piano keys, the sextet fuses traditional cultural sounds with new grooves and jives of the modern jazz age. “The Growl” appropriately commences the album, boasting a diverse collection of sounds and audio experiences. Teasing the listening audience with a taste of their versatility, Talat utilizes 9 minutes and 29 seconds to relax the listener, have them dancing in their seats, and then entrancing them, in the final moments, with mystical jazzy compositions. Talat’s wide array of musical mastering and expertise coalesce in The Growl, a masterpiece guaranteed to leave a multicultural purring in your ears.BEYOND RACE MAGAZINE

TALAT inclines toward Ashkenaz, Sephardic and modern Jazz all at once, and gets most of its juice from trumpeter Matt Shulman, reveals an unsuspected affinity for jewish music and a startling ability to combine it with free jazz, improvisation and multiphonic trumpet playing, which make it seems like singing and sometimes screaming – through the instruments while playing.JEWISH FORWARD MAGAZINE

TALAT plays thrilling jazz music on the sharpest edge of the knife, accompanied by a good amount of melancholia. We also hear klezmer influences, loose  completely, while just moments later everything falls back into its place. Shulman(Trumpet) and Mommaas (Sax) continuously chasing each other, playing through, under, next to, and against each other, just moments later returning to a splendid unisono. Pavolka (Bass) and Perlson (Drums) form the perfect rhythm section, with here and there beautiful, suprisingly short, but extremely sharp solos. All in all: jazz as we like to hear it, sharp and tight melodious and exciting flavors from start to finish from this master quintet.  Marc Nolis, Mazzmusikas, BELGIUM

TALAT provides a unique instrumental approach thanks to horn frontmen Matt Shulman (trumpet), and Marc Mommaas (sax): screaming, growling and chasing each other with instant, rapid motion one moment but yet tender and gentle at others. For the lovers of John Zorn’s Hasidic Jazz and his project Masada, it is highly recommended to check out the debut of New York based quintet TALAT  with the release of ‘the Growl’ :Avant Jazz growls and Klezmer equally trade off !  Dmitry Anushin, Time Out Moscow, RUSSIA

TALAT plays great, great music! ‘The Growl’ is a wonderful refreshing soulful energetic album, makes you want to experience the band live so hold your breathe until you experience the band playing live sooner than later !
TALAT plays sophisticated neo Jewish stylizations of contemporary jazz and klezmer combo, that i find intriguing and joyfull, adding new groovy music in several tracks has an intersting approach to the canonical jewish Gerry koster, Jazz up late, AUSTRALIA

TALAT is a New York-based ensemble who fuse experimental jazz and klezmer rhythms.  The band’s debut album, The Growl, features the kind of music you’d expect to hear in a big-city basement piano bar but with a twist. “Hasidic Monk” has a sample of “Avinu Malkeinu” worked into the undertow, while “Tikkun Olam (A Ladder to the Rainbow)” riffs off popular favorite “Somewhere Over the Rainbow.” Overall this is multi-flavored jazz infused with the spirit of Miles Davis.Katharine Hamer, Jewish Independent, CANADA

TALAT is another magnificent surprise in this years debut albums with its release of The Growl . This Cheerfull Quintet from New York excels with its hybrid imposition of Jazz and other European forms like Klezmer influences. This CD has a lot to offer for either fans of groups like Massada and to bebop lovers of the music of Thelonius Monk.Jose Francicso Tapiz, Ruta66,SPAIN