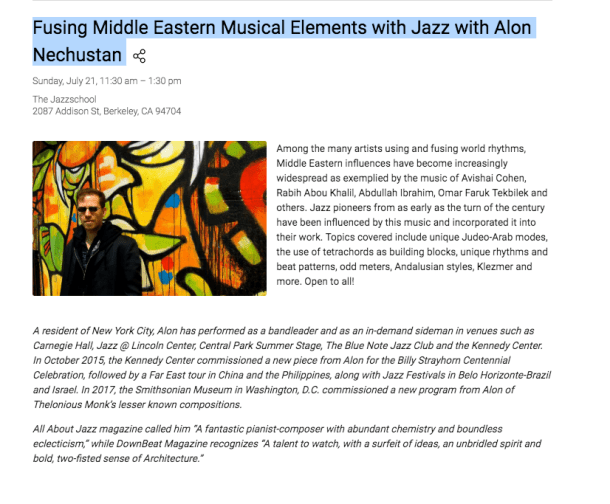 Among the many artists using and fusing world rhythms, Middle Eastern influences have become increasingly widespread as exemplied by the music of Avishai Cohen, Rabih Abou Khalil, Abdullah Ibrahim, Omar Faruk Tekbilek and others. Jazz pioneers from as early as the turn of the century have been influenced by this music and incorporated it into their work. Topics covered include unique Judeo-Arab modes, the use of tetrachords as building blocks, unique rhythms and beat patterns, odd meters, Andalusian styles, Klezmer and more. Open to all!

A resident of New York City, Alon has performed as a bandleader and as an in-demand sideman in venues such as Carnegie Hall, Jazz @ Lincoln Center, Central Park Summer Stage, The Blue Note Jazz Club and the Kennedy Center. In October 2015, the Kennedy Center commissioned a new piece from Alon for the Billy Strayhorn Centennial Celebration, followed by a Far East tour in China and the Philippines, along with Jazz Festivals in Belo Horizonte-Brazil and Israel. In 2017, the Smithsonian Museum in Washington, D.C. commissioned a new program from Alon of Thelonious Monk’s lesser known compositions.

All About Jazz magazine called him “A fantastic pianist-composer with abundant chemistry and boundless eclecticism,” while DownBeat Magazine recognizes “A talent to watch, with a surfeit of ideas, an unbridled spirit and bold, two-fisted sense of Architecture.”

3 years ago in Blog
Comments