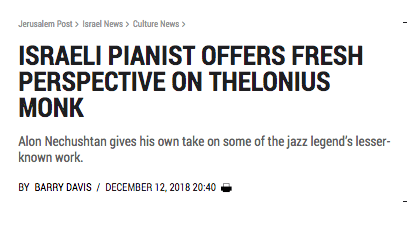 I was excited to talk to Barry Davis from the Jerusalem post about my prospective tour with the music of Thelonious Monk!

Alon Nechushtan gives his own take on some of the jazz legend’s lesser-known work.

BY BARRY DAVIS
Alon Nechushtan has been one of our more inventive jazz exports over the past couple of decades or so. In that time, he has put out around a dozen albums, both as pianist and composer, which span vast domains of sonic and creative intent. He has penned chamber, orchestral, electronic and multidisciplinary pieces, commissioned by leading contemporary ensembles in the US, Europe and Asia, accruing a clutch of awards in the process.

It is hard to place your finger on a definitive avenue of expression in Tel Aviv-born New York-based Nechushtan’s evolving oeuvre which, when you think about it, is spot on for a gent who makes a living out of an improvisational art form.
He recently turned his nimble fingers and grey cells to the work of Thelonious Monk, a singular pianist and composer who was at the forefront of the birth of modern jazz in the 1940s. The venture was prompted by a commission from the Smithsonian Institution in Washington, DC which, in turn, was spawned by an initiative by another prestigious cultural facility in the United States.
“I was commissioned by the [John F.] Kennedy Center [for the Performing Arts in DC] a year ago, to write a series of original compositions and arrangements for the Billy Strayhorn centennial celebrations,” Nechushtan explains, referencing the late composer, pianist, lyricist and arranger, best known for his long association with legendary pianist, composer and band leader Duke Ellington.
For that particular project, the Israeli culled material and baggage from his region of birth and current place of residence, much as the aforementioned greats did. “I chose to focus, then, on the Middle Eastern components of Duke and Billy’s music as, of course, they were [US Jazz] Ambassadors in the late 60s, and visited all the exotic places in the Middle East, including Iraq and Iran.”

AS LUCK would have it, an employee from the Smithsonian was in the audience, who was suitably impressed with Nechushtan’s interpretive effort; the two made contact and stayed in touch.
“At the time, I was interested in exploring the less known Monk tunes,” Nechushtan continues. 2017 marked the centenary of Monk’s birth, and there were quite a few shows and recordings offered throughout the year. “I mentioned that I may be interested in a project called The Dark Side of Thelonious Monk, showcasing his additional talent as an arranger, composer and thinker. I worked with rare Monk improvisations and compositions, including some that were never published, and I had a lot of fun unearthing, rehearsing and presenting them at the Smithsonian.”
Now, Nechushtan is bringing the fruits of that earnest endeavor our way, with shows lined up at Mazkeka in Jerusalem (December 19, 9:30 p.m.), Givatayim Theater (December 20, 9 p.m.) and Beit HaAmudim in Tel Aviv (December 21, 3 p.m.). The latter two slots will feature a sextet, with Nechushtan on piano, Ofer Shapira and Yonathan Cohen on alto and tenor saxophone respectively, Yonathan Kozlovsky on trumpet, David Michaeli on bass and Dani Bendikt on drums. The Jerusalem show will be a more intimate, trio affair, with Michaeli and drummer Ronen Itzik as the backing band.
NECHUSHTAN WAS, of course aware of the plethora of Monk tribute shows and recordings put out over the course of 2017. But he took something of a left-field approach to Monk’s work, as befitting one of the quirkier and more-free thinking members of the jazz fraternity. In fact, he took his cue from an earlier headliner re-release – Thelonious Monk Orchestra at Town Hall, originally released in 1959 and reissued in 2006.
“I thought the work [that arranger] Hal Overton did in setting the Town Hall session – by transferring Monk’s solos from one tune into a big band language by using horn play lines Monk used somewhere else – was the most brilliant and mind blowing thing at the time. Now it is a known compositional effect, which is done often.”
Nechushtan got what the arranger had discerned – what, in fact, any arranger worth their salt should embrace – that he should help to present Monk’s peerless charts without getting in the way.
“Overton understood the secret,” says the Israeli: “that Monk’s music has such a clear connection between composition and improvisation that it’s seamless, unbroken, continuous, fluid, organic – there’s almost no point in trying to pinpoint, except for the sake of academic discussion, what is what.”
It was a matter of referencing the central core of the creations, and running with them. “I thought my project would have to use materials from what musicians call ‘heads,’ or what classical musicians will call ‘cantus firmus’ or ‘passacaglia’ – in other words, the ‘theme.’ See, for me, it was important to incorporate Monk’s soloing transcriptions and, like Overton, to set the tone – using them in my work as an integral part, no less important than the ‘heads’ or written composition lead sheet.”

DURING THE course of his lengthy stateside sojourn, Nechushtan has learned form, and played with numerous artistic shakers and movers, including from the less structured side of the jazz tracks. He has learned to go with the flow, to keep his wits about him; to pick up on seemingly innocuous departures and mine the rich seams of his seniors’ experience.
“I had great fun studying and then playing, with a tremendous roster of fantastic artists that all shared with me their passion and unique knowledge,” he notes. “Sometimes [pianist] Paul Bley would say to me the most ridiculous things and, a second later, he would come out with the most profound logical postulations I’ve ever heard. So over the years, I learned to respect the highbrow and lowbrow pep talk, chat; the rapport, the rant, talking shop, and the pleasantries.”
There were plenty of gems for the picking. “[Avant garde saxophonist] Steve Lacy told me: ‘the more creative you are, the harder your life will get.’ That’s something that still, to this day, remains as potent, relevant and mind blowing to me as the first time he told me that, decades ago. It also applies directly to Thelonious Monk and all the extraordinary nonconformist artists.”

NECHUSHTAN ALSO pertains to the boundary-bending ilk of jazz artists, and has taken his art from every which way during his time in the States. But, he says he never forgets where he came from. “As a composer, I am drawn to the Hebrew language, the Israeli landscapes, the myriad subcultures, the melting pot and even political reality Israelis face and represent in Israel and, even more bluntly, abroad.”
And there is something in the mix that feeds off all of that. “I’m working these days, on composing a song cycle for a children’s choir, based on words by Amir Gilboa, one of my all-time favorite poets, whose words are like a punch in the face for me – a knockout!”
Gilboa isn’t the only late Israeli poet to get the pianist’s juices aflowing. “I’m setting Yehuda Amichai’s love songs for baritone and mezzosoprano, for another project.”
The work of Ukrainian Hebrew-language poet David Vogel, who perished in Auschwitz, also provides a fertile substratum for Nechushtan’s envelope pushing efforts. “I have also been working, for quite a while now, on Vogel’s Before the Dark Gate for choir. I’m constantly reading in Hebrew and consider myself lucky to have the chance to get deeper and deeper into vocal music from these and many other [Israeli and Jewish] writers.”
Expect more mind- and heart-expanding offerings where the Monkesque project came from.
For tickets and more information: https://www.facebook.com/Mazkeka/ (Jerusalem), https://t-g.co.il/ (Givatayim) and https://www.facebook.com/BeitHaamudim/ (Tel Aviv)

4 years ago in Blog
Comments