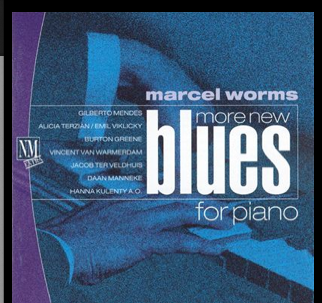 Dutch pianist Marcel Worms (1951) studied at the Sweelinck Conservatorium in Amsterdam with Hans Dercksen. After his graduation in 1987, he continued his studies with Alexandre Hrisanide and Hans Broekman, specialising in 20th Century piano music and in chamber music. He took also private lessons with the Russian pianist Yuri Egorov.

On the occasion of the centenary (1992) of Darius Milhaud’s birthday, Marcel Worms founded the Ensemble Polytonal, which Ensemble performed in an all-Milhaud program in Holland and France in that year.

He premiered early piano works of Arnold Schoenberg in the Icebreaker, centre of modern music in Amsterdam. He performed the complete piano works of Leos Janácek (including a four-hand piece, that he discovered in Brno). His programme Jazz in 20th-Century Piano Music, launched in the 1992/93 Season, was broadcast nation-wide by Dutch radio. It was subsequently released on CD by the Dutch label BVHAAST. As a result Marcel Worms was invited to play this programme in many European countries, North America, Russia, South-Africa and Indonesia. He launched this programme in New York and Washington DC in 1994 and returned to the US for recitals since then almost every year.

In the Season 1994/95 Marcel Worms started a programme titled Mondrian and the music of his time to commemorate Mondrian’s death, 50 years ago. Several composers, including Willem Breuker and Theo Loevendie had been commissioned to write for it . This programme was played in many European countries and the USA. About the concert in the National Gallery of Art in Washington the Washington Post wrote: “All this was virtuoso fare and Worms played it with joy, grace and, at times, humour that was contagious and captivating.” In 1996 he played this program in the Hermitage Theatre in St.Petersburg, in the Pushkin Museum in Moscow. A CD of the program has been released for Emergo Classics.

His programme ‘Blues for piano’ to which many well-known Dutch composers contributed with a piece has been premeried in January 1997 at the BIMHUIS, jazz centre in Amsterdam. In the meantime some 170 new Blues pieces have been composed for this project including pieces from around 50 different countries around the world. He played the programme at the Moscow Conservatory in 1997 and at the Conservatories of Beijing and Shanghai in 1998. In 1999 he played it at the North Sea Jazz Festival in the Hague, in 2000 at the Festival of Flandria, in 2001 at the Warsaw Autumn Festival and in 2002 at the EU Jazz Festival in Mexico City. In 2004 the program was presented at the Fajr Festival in Iran and in 2005 at the ‘Tbilisi Autumn Festival’ in Georgia. In 2008 he played at the Internatial Piano Festival of Bucaramanga (Colombia). In 2009 he gave concerts in a.o. Uganda and Sudan and also in 2010 he will perform there and in several other African countries. The project has so far been recorded on 4 CD’s.

In 2000 he played his Bluesprogram in all the countries of the Balcan. Composers from all of these countries wrote a contribution for this tour.

In the 1998-1999 season the artist has focused on Vincent van Gogh and Pablo Picasso and their relation to music. Both projects have resulted in a CD recording.

Between 1998 and 2008 concerts have been given by Marcel Worms in many European countries, South-America, South-Africa, Israel, China, Cuba, the United States and the Far East.

The artist is a regular guest on Dutch radio.

Since 2002 Marcel Worms focusses a.o. on the pianoworks of the Spanish composer Federico Mompou. In 2007 he organised a 3 days Mompou Festival in his hometown Amsterdam, that has been completely broadcasted by Dutch radio. In 2009 he released a cd with unpublished works for piano by Mompou, that had been discovered in Barcelona in 2008. He is the first pianist to have released these works on cd.

A tango program, which was performed a.o. in China and Argentina, resulted in a CD with Tangos for Piano in 2002. With flutist Eleonore Pameijer he is working on their ‘Six Continents Project’ in the Netherlands and abroad. For this project composers from all the 6 Continents wrote a piece in which they expressed their cultural identity. The program has been performed in many European countries, in the USA, Israël and India and it has been released on CD on the occasion of UNESCO’s 60th Anniversary.

A CD by the duo with works by dutch, jewish composers, persecuted by the nazi’s, has been released in 2005.

Since 2006 he has a musical partnership with violinist Ursula Schoch, subsitute concertmaster of the Royal Concertgebouw Orchestra.